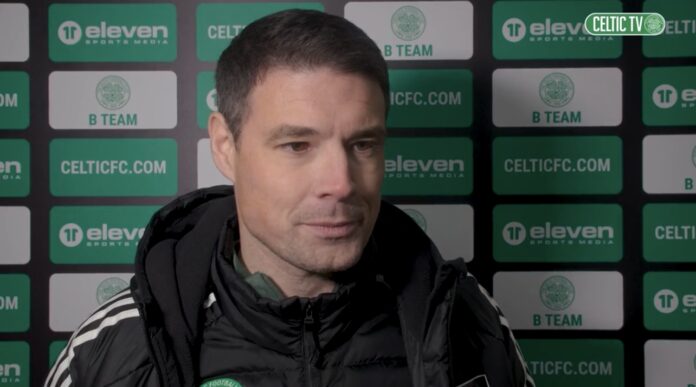 CELTIC Coach Darren O’Dea revealed he was lost for words after his Celtic side played out a 4-4 draw against the Caledonian Braves in the Scottish Lowland league.

CeltsAreHere were at the game and we share Darren’s disbelief. The bhoys were outstanding at times and won’t know how they’ve managed to leave the game with only a point.

After the game, Darren was a mixture of proud and gutted. He believed his team played exceptionally well and it’s hard to criticise them.

At this level, the bhoys are judged on performances rather than results. The Irish coach says they’ll watch the game back and tweak where they can improve things.

Darren O'Dea couldn't believe it after a strong performance against @TheBravesFC ended in a 4-4 draw. pic.twitter.com/fmbZYumjpb

It’s Celtic’s second season the lowland league. The standard of football might not be the best but the competitive edge in these games can give the young lads a lot. Because they are Celtic, all the teams who come up against them want to go above and beyond and make their mark against them. It’s a microcosm of what the first team go through in a week to week basis.

There are some exciting players coming through the system right now. Bosun Lawal and Rocco Vata being the notable lads who were given the chance to join the bhoys in Australia earlier this month. If you’re needing your fix of Celtic while the World Cup is on, get along and support the young lads.