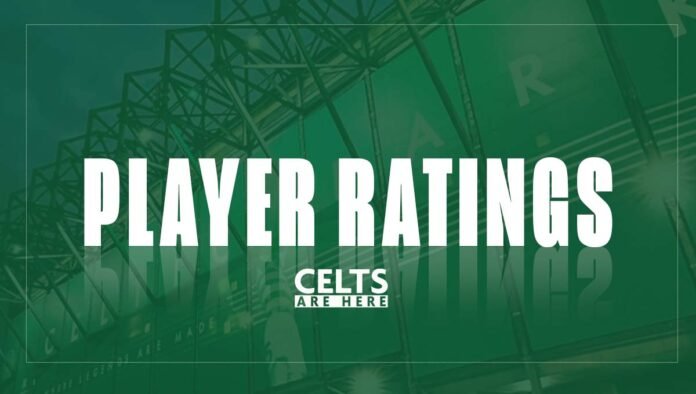 It was the same old story for Celtic in the Champions League as RB Leipzig won 2-0 at Parkhead thanks to goals from Timo Werner and Emil Forsberg.

Frustration and disappointment were the themes among the Hoops’ support following the game.

Here’s how the players rated.

The Englishman did make a few saves of note but could do nothing prevent either of the RB Leipzig goals.

The Croatian done well throughout apart from a short spell in the second half where he lacked sharpness and was caught on the ball a couple of times. Juranovic made a few drives from deep and got high and wide on the right.

Captaining the Celtic side for the second game in a row, Cameron Carter-Vickers stood out in the Hoops’ backline despite conceding two goals. The American’s presence is vastly notable when he’s not playing and tonight, the 24 year old made numerous tackles, clearances and interceptions.

The German didn’t look out of place at left centre back but his performance wasn’t as good as Cameron Carter-Vickers’. Nonetheless, Jenz was ample defensively in certain instances, particularly in the first half when he stood up Timo Werner and prevented the German from doing any early damage.

The Scotland international constantly looked to get the ball forward on the left hand side and opened up play on a few occasions. Similarly to the majority of his fellow defenders, Taylor didn’t standout yet wasn’t excellent either.

Matt O’Riley played the deepest role in the Celtic midfield for the second game running and was astute. The Dane was not afraid to get stuck into tackles, excelling in a number of duels and winning the ball back a number of times. He was unfortunate not to score in the first half when he hit the post with a low effort from range.

Starting for the fourth game running in the Celtic midfield, Reo Hatate was slack tonight. The Japanese misplaced some simple balls although in fairness, he did have a select few moments of magic however the negatives of his performances outweigh the positives.

The 23 year old was given a free role in attack for Celtic, playing just off Kyogo. Haksabanovic created a number of opportunities for his teammates, disclosing his creative abilities whilst also going close with a near post, left footed effort in the first half. The Montenegrin international was one of the brightest attacking sparks for his side with the substitution which seen him hooked on 66 minutes rather questionable.

Prior to coming off injured, Liel Abada was muted in his display. The Israeli had no efforts on goal as Leipzig left back David Raum dealt with Abada well before he was forced off 42 minutes in.

Daizen Maeda came off the bench at half time on Saturday and started tonight. However, the mercurial winger was poor, failing to make the ball stick to his feet and putting in a performance which exasperated many a fan, being too eager with some of his crossing and flashing a header off target in the opening minute.

It is fair to say Kyogo was quiet this evening. Granted, the Japanese was adequate in helping to build up and link the play however he didn’t get any sufficient service and admittedly didn’t look as energetic as usual.

James Forrest replaced Liel Abada at the end of the first half. The veteran winger looked fairly sharp and whipped a fair few dangerous crosses into the Leipzig box however the Scot has lost a lot of the pace he had in his younger years and this was noticeable tonight.

This was the first of five changes made by Ange Postecoglou with the second, third and fourth alterations coming on the 66th minute.

Giorgos Giakoumakis came on for Kyogo and missed what was a frank sitter just minutes after Leipzig took the lead. The Greek disclosed his physical presence and it will be intriguing to see if it is he or the Japanese who gets the nod on Saturday.

David Turnbull and Aaron Mooy came on at the same juncture as Giakoumakis and the pair looked keen in midfield. Mooy in particular got forward a reasonable amount and was tidy in his play.

The final Hoops’ change of the night saw Alexandro Bernabei take the place of Daizen Maeda on the left wing. The Argentine had barely any time to affect the match and it was just four minutes after his arrival on the pitch that the visitors doubled their lead and made sure of the points.

Celtic are all but out of Europe all together for the 2022/23 season unless some unprecedented events unfold in the Bhoys’ final two Champions League group stage ties.

Due to this, as frustrating as it may seem, attention now turns back to the league where Hibernian will be welcomed to the east end of Glasgow on Saturday with a 3pm kick off pencilled in.