Kenneth Paal is a technically gifted 23-year-old left back playing for PEC Zwolle in the Eredivisie, who currently sit 13th.

He could help solve Celtic’s fullback problem, providing a ball playing style that is more suited to Celtic.

Celtic next season will only have Taylor available at LB. He has improved but his main weakness is on the ball.

I have looked to find a full back that has strong passing with huge creative potential that Celtic could easily afford.

Paal is valued at £900k (Transfermarkt) with only a year left on his contract, so could be picked up quickly and for cheap by a team the size of Celtic.

If he was a target Paal could be picked up quickly in the summer well before Champions League Qualifiers.

Paal came up through the PSV academy as a CM. He played for PSV II in the Eeste Divisie. The player got some minutes for PSV transitioning to a LB but eventually moved to Zwolle for 1st team football.

He was heavily involved in Netherlands youth set up as well U15s-U20s.

I have created radars comparing him to Taylor to show differences in offence, passing and defence. Radar min/max is top 5 leagues, 10 starts and filtered for max Transfermakt value of £10 million. (Paal = Blue, Taylor = Green)

Paal has numbers similar to or better than Taylor on many metrics which is extremely impressive for a player playing in a significantly less dominant side in a harder league. 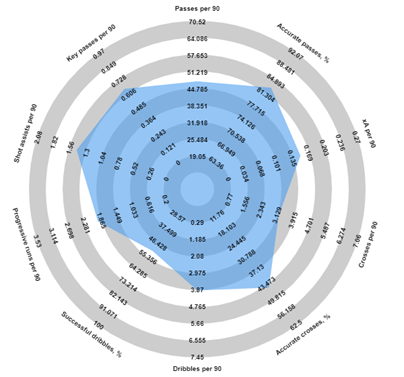 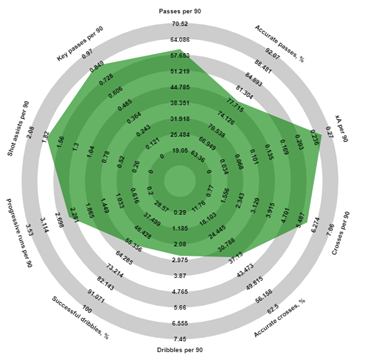 This radar suggests Paal is a stronger passer of the ball generally having better accuracy than Taylor. Taylor can get more opportunities higher up but his execution can be poor. 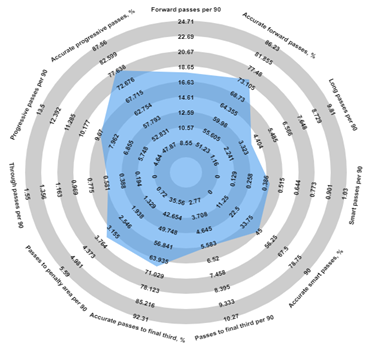 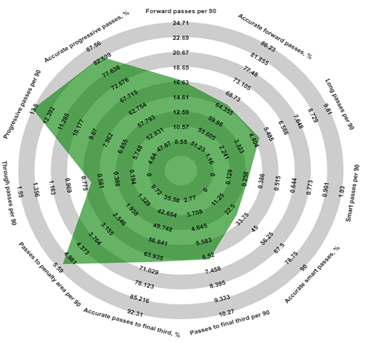 Defensively radars indicate similarities. Paal stronger in the air is a positive. However, I think Taylor playing as a defender his whole career makes him a more stable defensive option as Paal does have some issues which I’ll show later on. 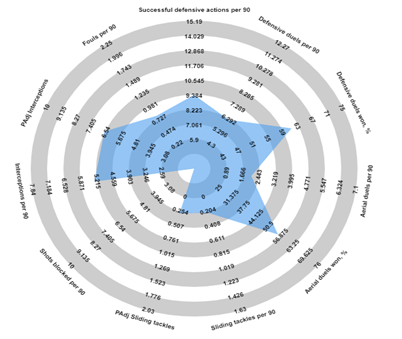 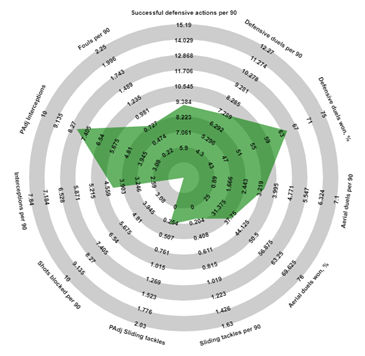 I like to compare scouted players to what Celtic have. I think Paal’s ridiculous 44% crossing accuracy is a key attribute that Celtic could utilise, with current full backs being poor in the final 3rd. Graphs also show his good passing accuracy.

Creatively Paal would be a monster for Celtic, already producing xA and key passes to rival Jonjoe Kenny whilst at a weaker club in a harder league. Paal is 4th in Eredivisie for shot assists as his passing allows him to create goal scoring chances. 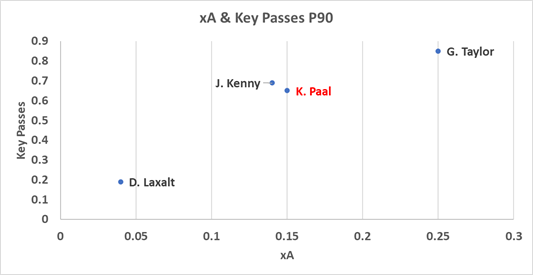 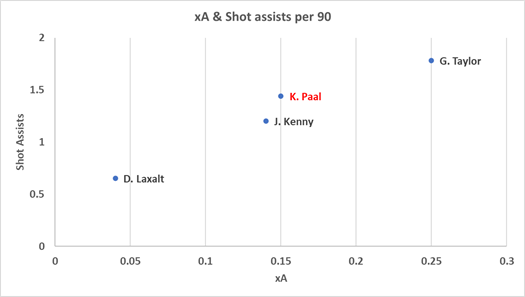 Paal at a weaker team is already making more positive final 3rd passes than Laxalt and Kenny. He also progresses the ball through a good dribbling ability. At Celtic, in a dominant side, I think he would dominate the ball progression and offensive passing charts.

Defensively is where Paal needs to improve the most. Positionally he is weaker due to not being a full back his whole career. However, he has improved hugely in the past 3 seasons in the position. 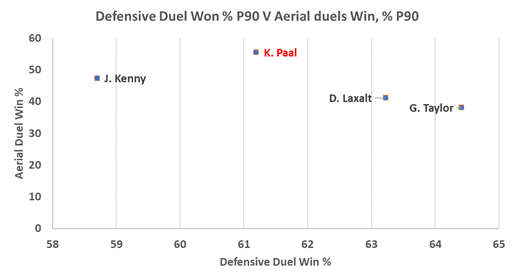 Wyscout reports allow for easy comparison of many key attributes with others in the Eredivisie. We can see from the passing charts below that Paal performs better than average in most passing areas with respect to the league. 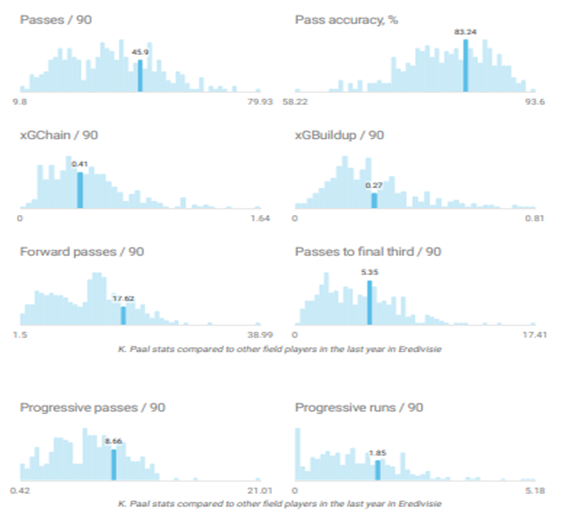 It is also easy to see Paal has elite numbers when it comes to crossing from open play. This is impressive considering the standard of the league. The cross location shows he’s good at crossing from deep and from closer to the by line. 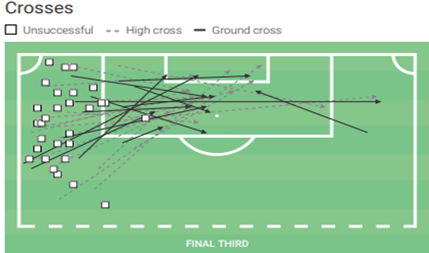 In terms of ball progression through dribbling, the data suggests he’s competent in the Eredivisie. Perhaps in a stronger team with more opportunities to get forward, this data could improve. 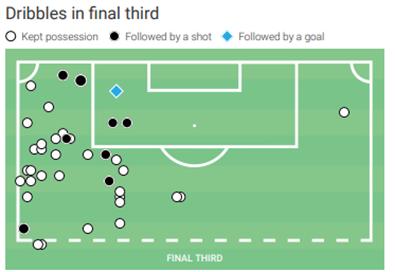 Defensively Pall is middle of the range for an Eredivisie fullback, really indicating his main qualities are as an offensive fullback. 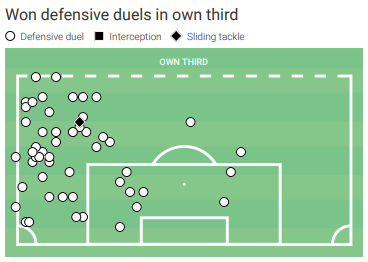 I have put together some clips of Paal’s crossing, passing and his defensive issues to get a better view of Paal as a player.

Paal has a great variety of crossing using both feet, he is very good at picking out the run or free man in the box with precision. pic.twitter.com/9tQlrg4zgP

(17/24)
Here I show some of Paal’s key traits on the ball. A great trait is the angled pass into the forwards through the lines, which is key to breaking teams down. The video also shows instances of finding angles to receive the ball and then quickly distributing it forward. pic.twitter.com/tcUfc6o28o

(18/24)
Here I show one of Paal’s issues that will need worked on and that’s his 1v1 defending. He can struggle positionally in these situations allowing opponents to knock the ball by him to get crosses in. This is an area Celtic coaches would need to improve. pic.twitter.com/VOO5e6jk8J

With Paal becoming a LB in his later teens it took him a while to start delivering output, but I think the improvement creatively in the role is obvious and could continue at Celtic. His xA has continued to rise season on season as he adapted to the role. 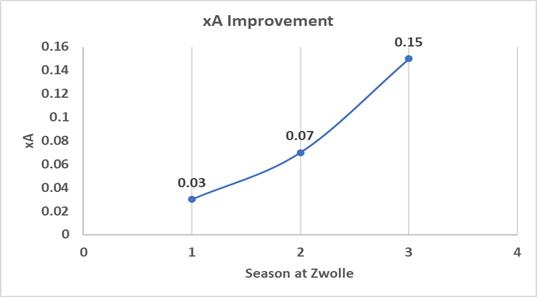 I also think when comparing heat maps of the past 2 season it’s clear to see Paal is more comfortable at the LB role positionally (19/20 top, 20/21 bottom). These maps indicate that Paal is playing higher up more often and closer to the touchline coming centrally less.

Paal is a good age profile with a contract that is coming to a close. He would be financially viable, available for around the £1-2 million. He has gained experience in a harder league for a weaker side and is ready for a step up in his career.

He is also the type of full back Celtic should be in the market for, with his focus on offence with strong ball & playmaking capabilities. I think the defender would be a very good signing and offer something from fullback that we don’t have.

Of course, there is a risk if Paal can step up to Celtic’s level but I think he has shown his capabilities for improvement in his career at Zwolle. I think he could be developed by Celtic into a good Europa League level player.