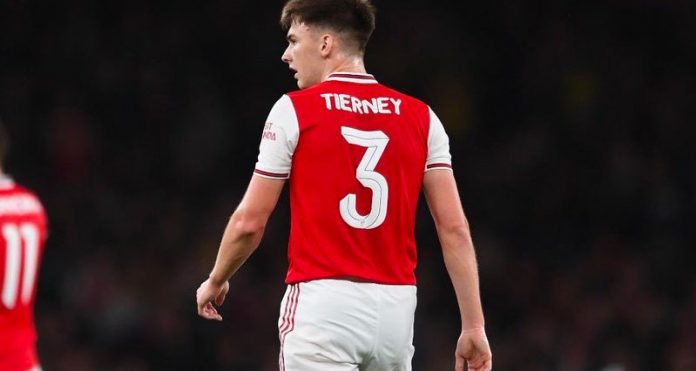 A potential summer exit for Kieran Tierney from Arsenal could be on the cards.

According to CBS Sports journalist James Benge, the Gunners are open to accepting the “right offer“ for the Scotland internationalist.

Despite being tipped to become a future club captain, Tierney has seen his first–team prospects diminish this season due to injury and the impressive form of Oleksander Zinchenko.

As quoted by the Daily Record, Benge told the House of Champions podcast:

“There is growing expectation at Arsenal that Kieran Tierney could move in the summer. If the right offer came in, all the parties are thinking this is something that might happen.”

The 25–year–old defender has made 120 appearances for Arsenal since joining three years ago, netting five goals in the process.

He has been linked with moves to Manchester City, Real Madrid, and Barcelona in recent seasons as a result of his impressive form, but he’s faded away this season with the lack of minutes.

The Arsenal board could be open to selling Tierney if a suitable offer is made. With his pedigree, there could be plenty of clubs keen to snap up the opportunity to sign a talented and experienced player who can offer plenty to a team‘s defence.

It remains to be seen if any potential suitors come forward with an offer that meets the Gunners‘ demands.