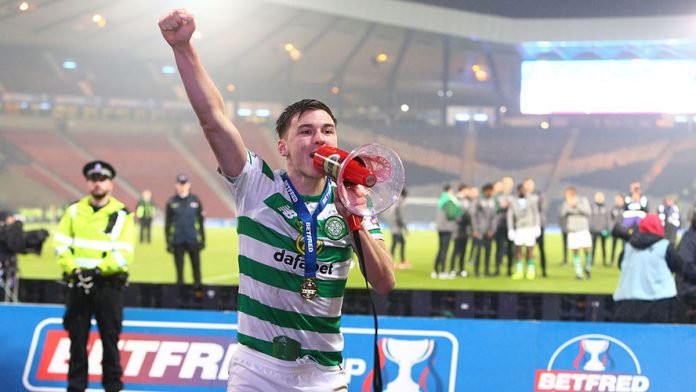 Former Celtic defender Kieran Tierney has reflected upon some of his best moments at his boyhood heroes, opening up on his experiences of living out his dream at Parkhead.

The academy graduate first broke through into the Celtic team under ex-boss Ronny Deila, nailing down a place in the side ahead of the experienced Emilio Izaguirre during the 2015/16 campaign.

Tierney experienced the joys of lifting trophy after trophy whilst with the club, playing his part in the Invincible treble, as well as a further two trebles.

Speaking to the Arsenal Website, the Scotland internationalist opened up on one of his favourite moments as a Celtic player, leading the celebrations with the microphone in front of a packed Paradise, stating the moment was like an ‘out-of-body experience’.

“You will never be able to compare that feeling to anything else in the world. It was seriously like an out-of-body experience.

“I’ve got the megaphone, and I’m leading the chants with people I used to actually sit in the stands with. I was on the pitch, looking straight at my mates who I grew up with, who are down there at the front singing with you.

“Stuff like that is fairytale stuff. It’s not until you talk about it afterwards or watch it back that I realise how insane, how incredible it was.

“You know what, I’ve never done an interview about this before or really spoken about it much. People just assume it means a lot to me, so don’t ask about it, but it really was incredible when I think about it now. What an experience that was. What a feeling it would be for anyone.”

It might have been disappointing to lose a player like Tierney, especially with his quality down the left-hand side and the added factor of being one of our own.

But, it is clear to see he still loves the club as a fan, and it has been great to see him go on and succeed so far down south, impressing a lot of supporters in England whilst also being linked to huge moves on the continent.

Who knows, maybe we will see the return of Tierney one do. I am sure a lot of Celtic fans hope so, and Kieran Tierney might even be the same further down the line.