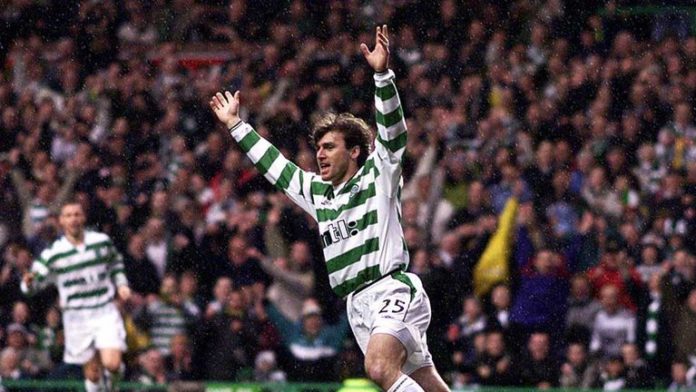 Former Celtic midfielder Lubomir Moravcik has opened up on his muted celebrations after scoring a double at Celtic Park in the 5-1 victory over Glasgow rivals Rangers back in 1998.

The Slovakia maverik is well-regarded amongst the Celtic support in this day in age due to his impressive performances under the likes of Dr Josef Venglos and Martin O’Neill.

However, Moravcik wasn’t always regarded in the best of lights on his arrival in Scotland, particularly by those within the media in Scottish Football, who questioned the move to bring the former Saint-Etienne man to the club due to his age.

As the saying goes, the rest was history, with Moravcik going on to become a fan’s favourite with many Celtic supporters, thanks to his performances on the big stage.

That included several goals against Rangers, scoring a double in his first season as a Hoops player in a 5-1 victory over the Ibrox side at Parkhead.

Speaking about that day, Moravick opened up on the brilliant reasoning behind the muted celebrations for his two strikes, insisting that it was a message to those who had doubted him on his arrival in Glasgow.

“It was like ‘Now you can see what I’m able to do’ – there was no celebration because it was easy for me to score goals like that,” he said, as quoted by the Daily Record.

“I would celebrate when I scored goals against Marseille or PSG but against Rangers? It was nothing for me.

“Seriously, there was a little bit of pressure on me that day. Only Mr Venglos believed in my qualities, and he told me before the kick-off: ‘This is a very important game for you and for me.’ So thank you, gaffer – no pressure!

“Rangers had a strong team – van Bronckhorst, Jorg Albertz and Arthur Numan – it wasn’t easy to prove myself against them. But it was absolutely perfect because I scored with only my second touch.

“It was a great moment, especially when I saw the reaction of the crowd and what it meant to them.

“My second goal was unusual; I didn’t score many with my head, but it was important for me and for Mr Venglos; it proved he signed a good player.”

Of course, after that night, Morvacik went on to produce many more special performances in the Hoops, proving exactly why people were wrong to write him off so early on.

To this day, that is still talked about and used as the reason why you shouldn’t write any player off before giving them a proper chance.

That message is very fitting this season, with how much this team and our manager, Ange Postecoglou, in particular, was heavily written off.