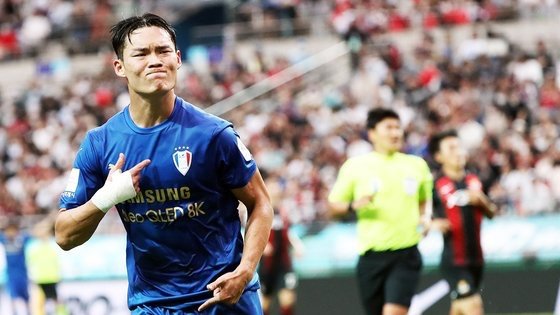 It is being reported that Korea Republic striker Oh Hyeon-gyu has agreed a verbal agreement with Celtic [Daily Record].

The Scottish champions are likely to complete the transfer at some point this week after they submitted a bid which is reckoned to be £2.5 million to K-League side Suwon Samsung Bluewings.

Ange Postecoglou has already added three new additions to his Celtic side during this January window after he brought in Yuki Kobayashi, Alistair Johnston and Tomoki Iwata to bolster the squad.

Oh will have to compete against Kyogo Furuhashi who hit his 20th goal of the season at the weekend against Greenock Morton in the Scottish Cup.

Greek international Giorgos Giakoumakis is likely to depart Parkhead this month and the Hoops have remained one step ahead of the game in recruiting a replacement for the 28-year-old forward.

Sources have told CeltsAreHere that the forward is in Glasgow and is ready to complete his move.

The forward has spoken to a Korean media outlet and revealed that he expects to join Postecoglou’s side at some point during January.

“We verbally agreed on personal terms and expect to complete the transfer within a few days,” said Oh Hyeon-gyu speaking to Korean outlet Mooye.

It is likely to be the last addition to the squad during this window but even though the league leaders have lost fullback Josip Juranovic and likely to lose Giorgos Giakoumakis they have found replacements and brought in a top quality defender.