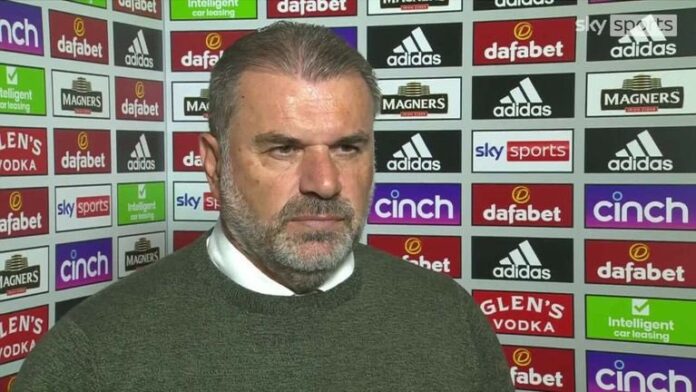 ANGE POSTECOGLOU has admitted that his Celtic side wasn’t at their best on Wednesday night in their 2-1 win over Motherwell.

Celtic started quickly, with Kyogo opening the scoring inside the first 15 minutes, setting Celtic up for the game ahead. But, the team failed to take their chances and headed into half-time with just a goal lead.

After Jota’s disallowed goal, Motherwell started threatening the Celtic defence, swinging some high balls into the box. Luckily, Celtic added another goal to their name before Motherwell got only the scoresheet.

Speaking after the match, Postecoglou was honest in his assessment but praised his team’s determination, saying; [Daily Record]

“It was a grind today. We had to work awfully hard.

“Credit to Motherwell, I thought they worked awfully hard themselves to disrupt our play and we just never got into any sort of rhythm today.

“Especially in the first half, I felt we just complicated things a bit and made things difficult for ourselves but we found a way to win again. That’s always, particularly away from home in the Premiership, it’s always a challenge but it’s always good to take three points.”

It wasn’t a typical Ange-ball performance, but the three points were the objective, and Celtic achieved that.

With just one match left to play before the World Cup break, Celtic sit at the top of the table with a seven-point lead. A great place to be in November.