We can’t confidently say we’ve found a player who remotely resembles Kieran Tierney or hold a candle to the former academy player. It’s imperative we find someone this summer who can make the position their own.

BhoysAnalytics has been scouring the data and has found a real gem Celtic should be looking at.

He is a 22-year-old left-footed left-back who has a similar style of play to Kieran Tierney.

A pacey dribbler that’s good on the ball. But is he good enough for Celtic? What does the data say?

Puchasz has very high Key passes P90 at 0.52, which is less than Taylor (0.75) but his should be larger due to Celtic being so dominant. Puchasz showing elite level numbers here for a less dominant side is very promising (Laxalt 0.09 KP/90 a disastrous signing). 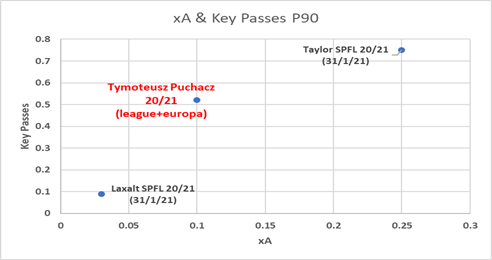 Some quick offensive data from the Polish league shows Puchacz to be a very dominant attacking full-back. The player is 6th in amount dribbles P90, 5th in offensive duels 23rd in crosses P90, 9th in progressive runs P90 and 3rd in shots P90.

Crossing is an area he mimics Kieran Tierney. The Pole is at his most dangerous 1 v 1 where he can use his pace or trickery to get down the outside and cut a ball low and hard back across the goal. 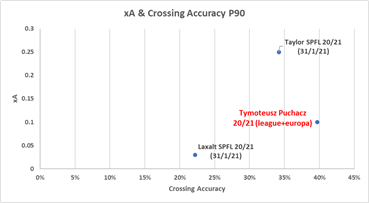 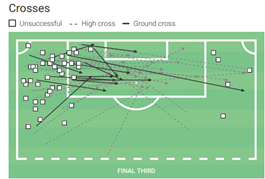 We can see on this chart that Puchacz dribbles far more than any other Celtic LB. Celtic players should do it more and Puchacz has a real talent for it. With a drop of the shoulder, he can fake to come inside but then suddenly he’s away down the outside (like Tierney). 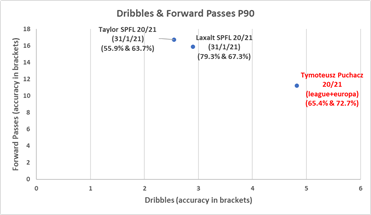 He is also capable of using his close ball control and dribbling to get out of difficult situations with his back to goal.

We can see from his dribble map the amount of danger he can cause as well as bringing the ball out from the back. 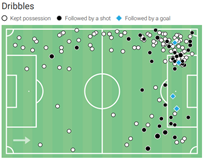 Puchacz is competent on the ball and can spray it around with accuracy. He outperforms Celtic LBs in accuracy so would be a huge improvement on what we have. Some of his passing is a joy to watch with his imagination and inventiveness

Being very offensive his defensive side of his game can suffer. However, due to his pace and strength, he is a very difficult player to get away from even if beaten once. This is proven in the graphic below where only one goal has resulted from a defensive duel loss. 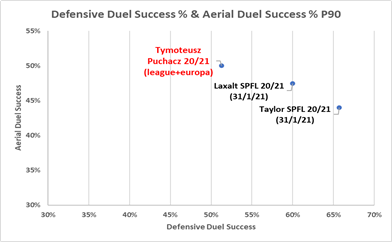 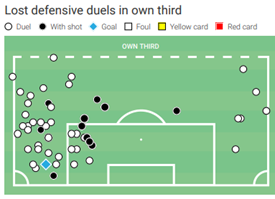 Scouting Puchacz was an absolute joy, he’s attacking creative and inventive on the ball. If Celtic were looking for a Kieran Tierney replacement, Puchasz is as the closest thing I’ve seen that Celtic could feasibly afford.

I hope that he has been identified by the club as he is a real gem I think fans would adore. So much ability already with room still to grow it would be mad for Celtic not to try and transfer him in.