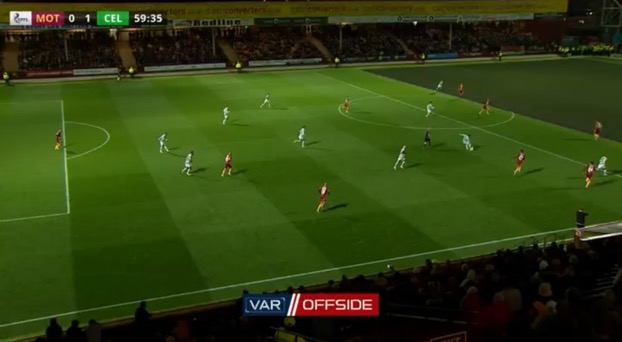 JOTA had the chance to double Celtic’s lead in the second half, and did so.

He was played through one-on-one, and brilliantly lifted the ball over the keeper. However, as he turned to celebrate, the linesman raised his flag.

VAR then had a lengthy look at the decision, which was incredibly tight. Eventually, those operating the technology agreed with the on-field official, and Jota’s goal was chopped off.

The graphic that the officials used in the VAR room is nothing short of a joke. The camera is closed to Celtic Park than it is to Fir Park! Just take a look at this.

There are supposed to be six cameras; surely there is one in the same half!

Thankfully, the decision wasn’t costly, and Maeda’s strike was enough for Celtic to maintain their lead at the top of the table.

It was a nervy end to the match for Celtic, but the team hung on and managed to see out the game. It’s a great three points which keeps the Hoops with a great lead with just one game to play before the World Cup break.