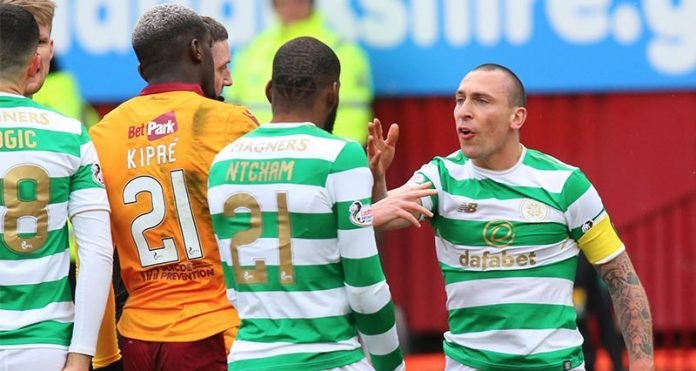 Cedric Kipre jumped the shark tonight on social media as he retweeted an obsessed Ibrox fan who used his camera to film footage of his altercation with Scott Brown.

The Gers fan, who was watching the mighty Glasgow Celtic take a ten point lead over his own side today must have been left frothing at the mouth – so much so that he had to record and upload the footage that the Motherwell star has since retweeted.

The player who has been sent off twice against Celtic also posted an image of today’s game with the tagline ‘Unbelievable’.

Sympathy for Kipre? Remember this went unpunished and could have finished Moussa’s career.. pic.twitter.com/wkB6U4Xh8e

Not even a booking for this Cup final lunge – that is unbelievable.

For what it’s worth, today, we thought the decision by the referee was harsh but as we’re told again and again – if you kick out at a player you run the risk of being sent off.

It was a frustrating day for Celtic as they failed to properly capitalise on a ten men Motherwell who closed ranks and did well to keep Celtic out. A point was a fair reflection on the game.