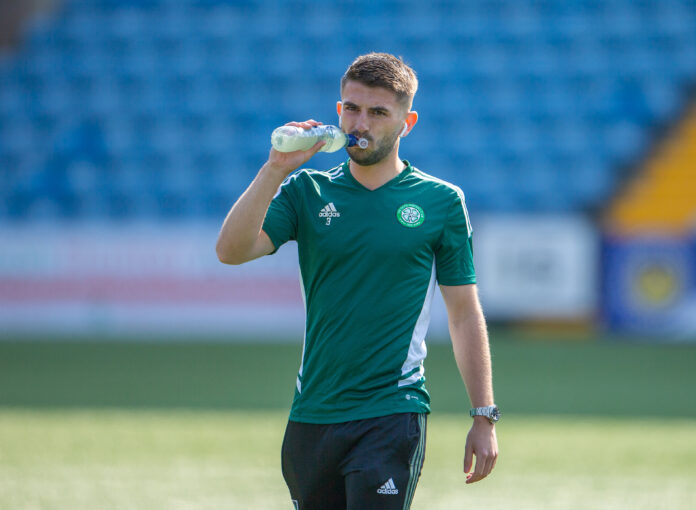 GREG TAYLOR has admitted that Celtic need to step up the table in Europe, admitting the team is deflated after the Tuesday night result.

Celtic ran RB Leipzig close but couldn’t get a result, with the frontline unable to hit the back of the net despite the numerous chances.

It’s a real concern that Celtic aren’t hitting the back of the net, and missing a lot of chances has become a common occurrence in the Hoops’ past few games, with Haksabanovic even suggesting that the team stay behind after training and work on their shooting.

Taylor has even reflected on his shot that struck the bar, admitting he could’ve done better. Giving an insight into the atmosphere in the dressing room, the left-back said; [Daily Record]

“I probably could’ve caught it a bit cleaner, but it came off the bar and then it doesn’t fall for us. But that’s what this level is, we’re a bit deflated to be fair.

“I thought we were looking good at that spell and again for periods right throughout the game. Maybe they started the night stronger and finished a bit stronger, but certainly that middle chunk we were right in that game, which is the sickening part.”

The Scotland international insists that the performance levels don’t match the results, with Celtic only able to register one point after four games;

“I wouldn’t say so. But with performances it doesn’t show that way, but in results it does.

“It’s just the elite level, I’ve said it before, we need to be that bit more ruthless at both ends and we’re not quite there yet. We have played well within the game. Everyone in the stadium can see that.

“There’s a team playing our football, we’re not deviating away from that at all. Every boy out there, the subs who came on, gave their absolute all for this club.”

It’s frustrating to watch Celtic fail to take their chances, but fans know that the progress is there and everything just has to fall into place now.