Celtic put in an awful performance which saw them lose 1-0 to bottom side Ross County xG was 1.68-0.78 in Celtics favour but with post shot xG of 0.89-1.39 in Ross County’s favour, they were well worth their win

Celtic had 18 shots, 10 of which had xG of 0.05 or less. Even worse 5 of these only had xG of 0.01. Embarrassingly pathetic shot choices. A persistent unfixed problem throughout Lennon’s tenure. 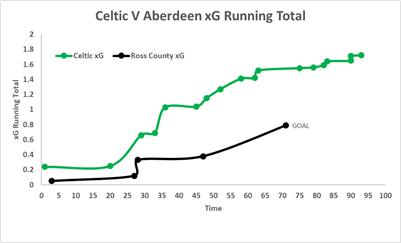 Despite the pitchforks out for him, I gave Ryan Christie MOTM postgame and was happy to see the data back this decision. Confirmation bias from the Celtic fan echo chamber had me doubting myself but the fans are wrong and so was the hate.

Edouard had 0 shots and put in what is likely his worst ever performance for Celtic without the hate Christie gets. Christie had 7 shots, getting 1.01xG, even better is 5/7 were from inside the box and 4 of these were good quality chances >0.1xG.

Christie was well above average in successful dribbles (71% to 49%) & touches in the box (7 to 2.66). Although luck wasn’t kind to him on the night, it was an all-round good offensive performance.

Christie also had 75% defensive dual success rate, higher than average 56%. Here he does what he does best providing intense pressure. He wins the ball hits the by-line and cuts it across to Edouard who should score.

Here Christie gets on the blind side of the County defender before making a run-in front of him to gain a free header. This is good movement and he’s unlucky not to score.

Celtic had a warning before the goal from a corner in the 1st half which once again showed we can’t defend crossed balls. Rogic’s starting position is static meaning the County player easily gets a run and jump on him.

Celtic marking falls apart, we can see Kenny is no longer goal side. A County player gets a free header and Kenny has his hands in the air like he just doesn’t care. Lucky not to concede, would we learn from this. NO.

Immediately there are issues as Celtic have left a man completely free at the back post. Brown, the captain, sees this and does nothing. Before the ball is kicked Laxalt has already lost his man (2nd pic). White the tall target man marked by a small full back.

White gets goal side of Brown so Laxalt can’t recover. Brown doesn’t react and White gets a free header in lots of space. Clearly, no opposition analysis was done & I doubt Neil Lennon knows who White is. He thought May started for St Johnstone regularly for example when he was discussing St Johnstone threats last week.
Welsh and Brown are zonal with others man marking. This isn’t wrong and hybrid system is common but when you don’t know the opposition it doesn’t really work. Mark biggest threats and cover important areas, neither was done. Welsh could have been on White for example.

CBs stifled County easily combatted Ajer by marking him out of the game and letting Welsh have the ball. Ajer had less dribbles, progressive runs and forward passes than average. Jordan White with a good shift of pressing work.
Welsh 51 forward passes to Ajer’s 16. Welsh not good on the ball so they let him have it. Aerially White swapped from Ajer to Welsh taking advantage of his poor ability in the air as shown below he easily wins it which leads to a good chance. 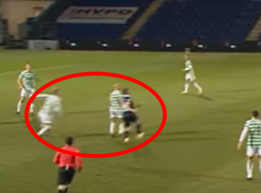 Laxalt had one of his most creative performances providing 3 shot assists and 0.12xA. He completed 0/5 crosses and most amusingly Taylor in 8 minutes outperformed him. Taylor had 1/2 successful crosses and 0.24xA in the game. Just shows how bad Laxalt is.
Positional pass maps show how important Taylor is as a focal point for forward play. But when Laxalt is in there he doesn’t link with Eddy as Taylor can.
Below shows issues with Laxalt central position compared to when he finally gets wide. The first one results in a long shot due to limited space. Second, he has stretched the defence with width creating room for Christie to run in behind and get a good chance.

With Taylor off, the team looked to Kenny for width and creativity. Although he did push forward no output came. 1/6 crosses completed and 0xA. Further forward compared to the last game, however, shot locations show right side is not utilised by the team. 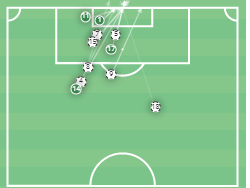 Although Christie missed the big chance, the move by the 3 attackers is really well worked. Mcgregor skips by 2 and plays Eddy in behind who crosses into Christie’s run. This was Celtic’s only well-worked move of the match which is the actual concern, not the miss.

It was the first time I had seen mass unconscious bias in the Celtic fan echo chamber, it was disappointing to see fans hate on Christie for one missed shot, I hope the data and evidence I’ve provided helps show that we can all fall victim to unconscious bias.
We must use data to escape these biases which is what I have tried to show. Overall the clubs a mess and Lennon continue to damage the club and its reputation. Kennedy should be put in to see out the season as it would mitigate some damage but we continue to do nothing
[Bhoys Analytics]

In what will have been a whirlwind 24 hours for Celtic youngster Adam Montogmery; the forward signed a new four-year deal with the club...
Read more

‘I just don’t get it’, ‘Unleash Him’: Immediate Celtic Starting XI Reaction

The John Kennedy interim era begins today and he's handed a rare start to Patryk Klimala who will be up top with Odsonne Edouard. The...
Read more

Life after Lennon begins today but with an interim boss in place for the last eight games of the season. Who the next Celtic...
Read more

In what will have been a whirlwind 24 hours for Celtic youngster Adam Montogmery; the forward signed a new four-year deal with the club...
Read more

‘I just don’t get it’, ‘Unleash Him’: Immediate Celtic Starting XI Reaction

The John Kennedy interim era begins today and he's handed a rare start to Patryk Klimala who will be up top with Odsonne Edouard. The...
Read more

Life after Lennon begins today but with an interim boss in place for the last eight games of the season. Who the next Celtic...
Read more