Starfelt is a strong ball playing CB that helped Rubin Kazan to 4th in Russia. They also had the joint 2nd best defensive record in the league.

At Rubin Kazan he would play in a back 4 set up, which is good as I think this is how Ange intends to set up this season. He has also in the past played on the right hand side or in a back 3 – so he’s flexible.

Being left sided Starfelt will 100% be replacing Ajer. If partnered with Jullien this would be the most experienced natural CB partnership Celtic have had for a while. His mobility will compliment Julien’s physical and aerial presence well I think.

One weakness might be he isn’t left footed for the left side but that hasn’t stopped him having some of the best passing stats in the Russian top flight, however I do think it’s hampered his ability to bring the ball out from the back, with low dribbling numbers.

Starfelt came through the Brommapojkarna youth system earning himself a move to one of Sweden’s biggest teams IFK Goteborg. After a 2 season spell there where he played across the 3 CB position in back 3 & 4 set ups he earned himself a move to Rubin Kazan for 900k.

Comparing heat maps between Starfelt & Ajer yields some interesting observations. As expected Ajer covers a lot more ground getting forward a lot more than Starfelt. The difference in the amount they bring the ball forward clear to see.

Starfelt is more about distribution staying central to move the ball about via his good range of passing. Starfelt is more positionally conscious than Ajer, which will suit Ange as he prefers his CBs to sit at the base and be distributers rather than ball progressors.

Starfelt is a strong defender with a defensive duel success rate of 80% which is stronger than any CB in the Scottish Premiership. Another strength is that he doesn’t give away many fouls. In fact, he gives away far fewer than any other CB in Scotland. 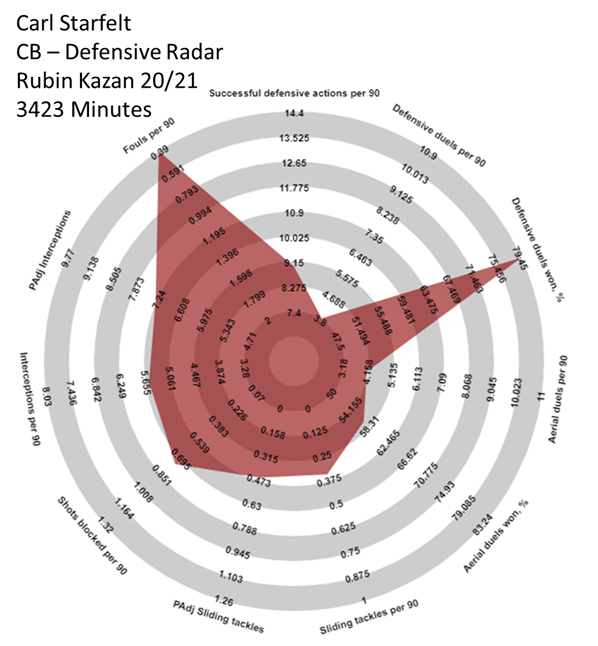 He’s good at ground duels and only tackles when he needs to attributes Ange could use to great effect in Scotland. His mobility and strong positioning are shown as well with good numbers in shots blocked and PAdj interceptions.

(12/25)
His weakness unsurprisingly is aerial duel success rate of 57% however he did score 3 good headers from set pieces last season, so would still be useful from set pieces.

Video below of headed goals. Smart runs in the box. pic.twitter.com/TnFWxacmRo

Starfelt is a stronger defender than Ajer, both positionally and on the deck. However, Ajer does have the height advantage that boosts his aerial duel success. However as an aerial threat offensively Starfelt is much stronger than Ajer. 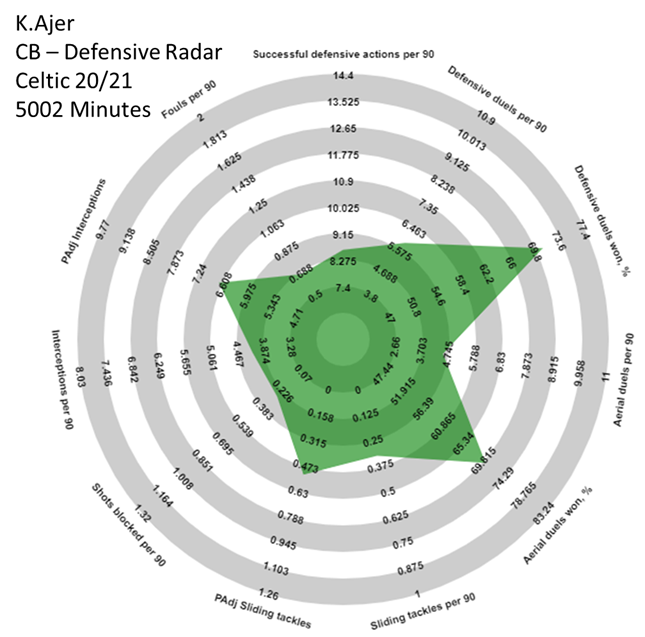 On the ball radar

From an on the ball perspective Starfelt is the perfect profile of CB for an Ange side. With a great range of passing he will be able to push the Celtic team up the park quickly and efficiently. 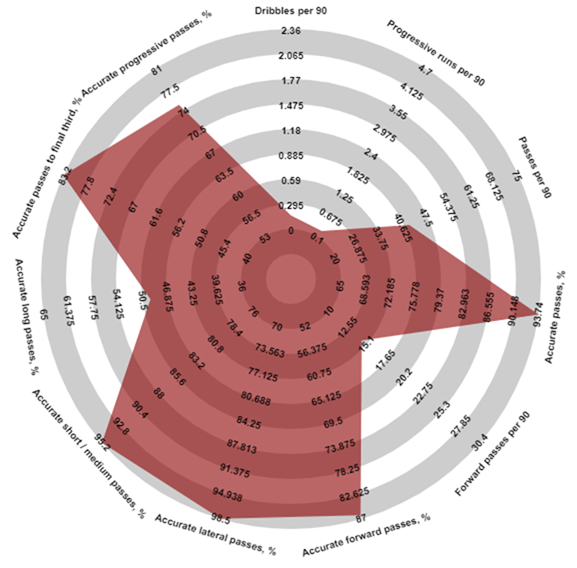 He also doesn’t go long very often which is very in line with how Ange plays focusing more on short forward passing. Starfelt prefers to use his great range of passing to get out from the back rather than bring it out himself as shown by limited dribbling numbers.

Compared to CBs in the Scottish Premiership Starfelt is top of the table for:

The data indicates he’s very good on the ball.

Overall Starfelt is much stronger on distribution than Ajer however, Ajer dominates at being able to bring the ball out from the back with his dribbling.

We can see on defensively Starfelt is very strong hitting nearly 80% in defensive duels far ahead of any other Celtic CB. Aerially however he is second weakest from the selection. 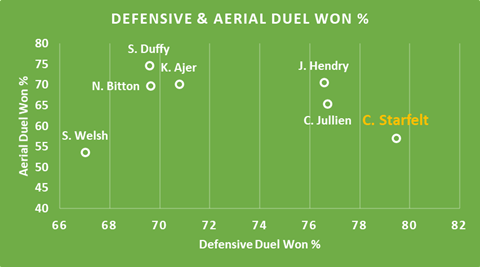 Starfelt produces really good numbers here getting himself into position to stop shots reaching goal as well as intercepting at a good rate. Interceptions will be important under Ange as CBs can be left 2v2 at times. 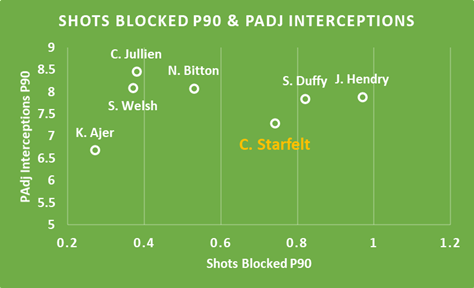 On the ball its clear to see he is far better at distributing short to the midfield & full backs rather than going long. Ange prefers short sharp passing which has been visible during pre-season. Long passing less of a priority. 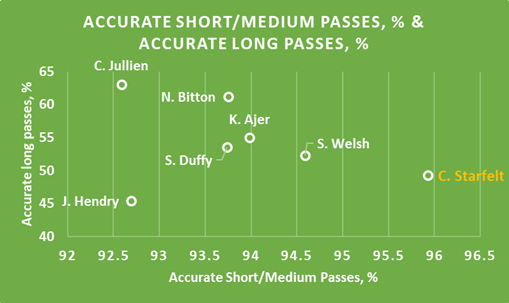 Starfelt very similar to Jullien here, not a huge dribbler and likes to play forward a lot. Coming to an easier league with a more dominant side, I would expect these figures to improve, maybe even to a better level than Jullien. 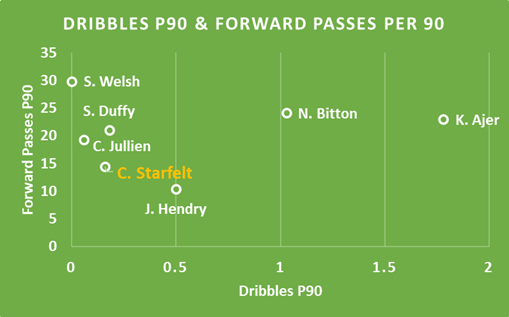 Starfelt is a good profile of CB for Ange’s philosophy. Very mobile, good defensively and very talented on distributing the ball. He is disciplined positionally which is required for CBs in Ange’s system that can often be left 2v2 at the back.

At £4.5 million this, for me, is a strong signing. On top of that he is flexible across the CB positions and could easily partner and compliment Jullien’s strengths and weaknesses when he returns.