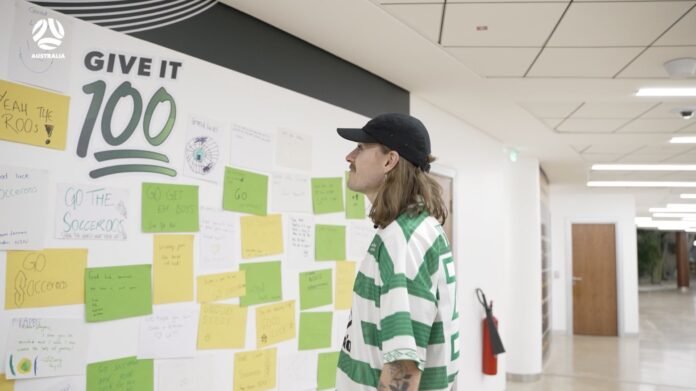 Former Celtic youth player Jackson Irvine has turned up to the Australian Camp wearing a very retro Celtic top as the Socceroos check in for this months World Cup.

The 29-year-old is known as a bit of an eccentric character. Since leaving the Hoops, the midfielder has played in Scotland as well as down south, but now plays his football in Germany with St Pauli.

The former Celtic player isn’t just wearing any retro Hoops jersey, he turned up in a Mark Viduka shirt.

Viduka, another Australian who pulled on the green and white is one of the Socceroos biggest ever exports.

Aaron Mooy has taken his place in Australia’s World Cup squad. The midfielder flying out to join his fellow countrymen ahead of the trip to Qatar.

One former bhoy who didn’t make the cut this time around is Tom Rogic. The Celtic icon spent a long summer looking for a new club after leaving Celtic at the end of last season. Tom would eventually end up at West Brom, but his fractured relationship with the Socceroo coaches meant a call-up was never likely.

We didn’t expect to see a Celtic jersey rock up to the Aussie camp, and if we did, we’d have been sure it would’ve been Aaron. Hail Hail to Jackson Irvine.