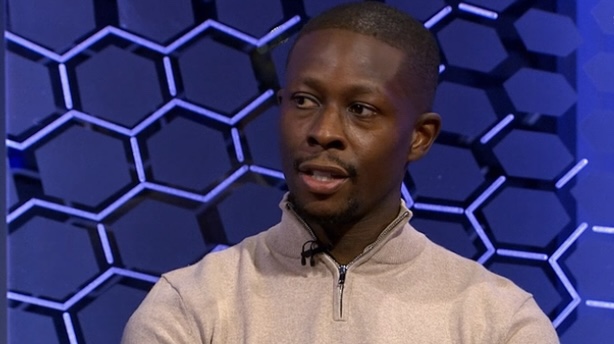 The handball incident at Celtic Park on Saturday has opened up a can of worms and has been the source of much debate since the game finished.

Celtic conceded a penalty to Dundee Utd after VAR officials deemed Alexandro Bernabei had handled the ball in the box.

Bernebei goes up for a header, he’s looking the wrong way, his hand is not by his side because they’re naturally up as he keeps his balance while in the air. While he’s looking the other way, the ball hits his hand.

VAR pulled it back and after three or four minutes, the penalty was given.

The Sportscene pundits had their day, Steve Kettlewell and Marvin Bartley had their say.

Kettlewell said: “I think it’s incredibly harsh, but I think it is.

“He doesn’t know anything about it. The ball obviously comes in but I just feel his arm is outstretched from his body and that’s what the officials are looking for.

“I think we’ll see this type of thing being given in Scotland in the coming weeks.

“Also, the ball is travelling towards goal.

“A lot of people are talking about ‘it’s a natural position’. I don’t feel it is when it’s that far out from his body.

“For me, I think you’ll see that given most weeks.”

Bartley added: “I agree with Stuart.

“Again, I don’t think he knows much about it. It’s incredibly harsh but I just don’t think it’s a natural position for his arm to be in regardless of going for a header or not.

“So I think the referee and the VAR got the right decision.

“But I would be highly frustrated if that was against Livingston.”

I agree with most of this. I think it’s very harsh, but the handball rule has become so stringent, almost any time a ball hits the hand it’s a penalty. The rule needs to be looked at, common sense has to be applied.