Nisbet at 24 managed 17 goals & 3 assists in his first season at Hibs and just got his 1st international goal against the Netherlands. Is he ready to step up to Celtic’s level?

Forwards at Celtic need to have strong, technical ability and be good finishers. The ability to hold up the ball and link with others in tight spaces is crucial. They must be intelligent and make the correct runs to generate opportunities.

I have pulled Edouard & Nisbet’s data so a comparison to an elite level striker in Scotland can be made. Max & Min data for radars comes from SPFL Premiership strikers that have started at least 10 games.

Of course, Nisbet is miles off of Edouard’s ability and likely will never reach that level. This is good to see the size of the task Celtic have replacing Edouard.

The radar shows Nisbet is a good striker for the Premiership but he isn’t currently capable of filling Edouard’s boots. More successful dribbles than Edouard the only metric he’s ahead. 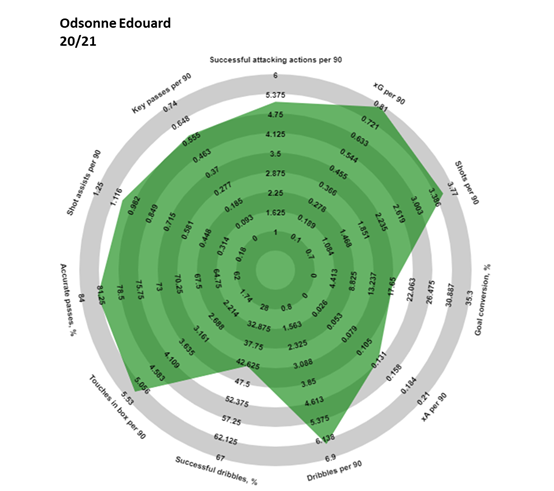 Nisbet doesn’t rank well in many metrics, ones, where he ranks well, are goals where he’s 2nd, shots where he is 4th. He is also 6th in xG P90. So positive in and around the box and in front of goal.

However, there are some concerns over lack of creativity and linking up play. 13th on xA P90 behind quite a few other limited forwards in weaker teams. He is also 17th for touches in the box for forwards which isn’t great. He is also below Griffiths on counter-pressing.

Nisbet is effective in the penalty box scoring the majority of his goals from central high xG areas. His shooting outside this central area should be curtailed due to limited success. He also scored 7/18 goals from crosses so might suit Postecoglou’s style. 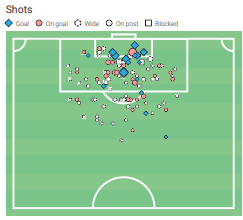 In terms of creativity, Nisbet isn’t providing a huge amount to his teammates. Generally middling to in the percentile ranking in the league. At Celtic, he would be expected to greatly increase his impact here.

Much like his creative side on the ball, Nisbet doesn’t excel here. He would need to have much more influence in games at Celtic. Perhaps this is more systematic at how Hibs play.

Progressing the ball himself Nisbet is competent and can generate chances and goals at a reasonable rate for the league.

Loss Index is the number of ball losses a player makes divided by the successful actions in an attack. Nisbet is losing the ball 3 times for every successful attacking action which is poor in our league. He needs to be more efficient than that.

Offensive Note: Griffiths data is skewed due to limited minutes and substitute appearances. Nisbet as expected is providing output at a rate not far off Moi already. He is some distance ahead of Ajeti in both xG & xA while playing at a weaker team. 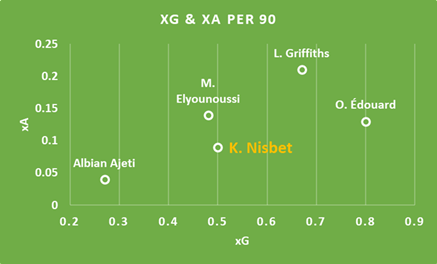 Again, similar to Moi and providing a good threat in attack. You can see Ajeti’s key strength is finishing. Hopefully, we get to see a bit more of that next season. 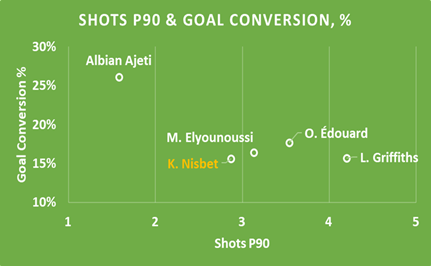 Nisbet is an accomplished ball progressor and much like the previous 2 graphs is not far off Celtic’s best forwards. 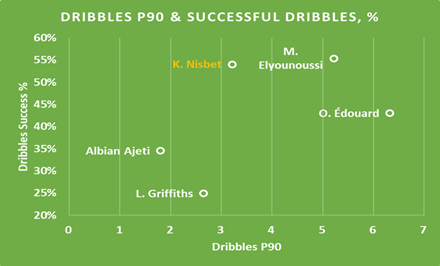 An area Nisbet will need to improve is his ability on the ball and linking up with players. Perhaps trying to force it more at Hibs rather than maintain possession. I’d expect this data to rise in a dominant side. 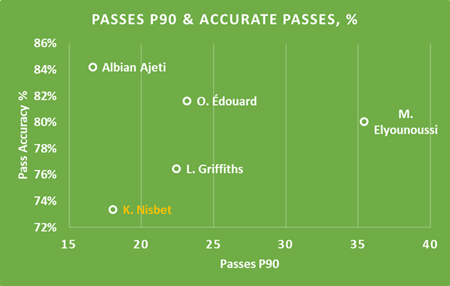 Again, still ahead of Ajeti in terms of trying to move the ball to more dangerous areas of the pitch. This is likely down to his better mobility, getting him in better areas to provide these passes. 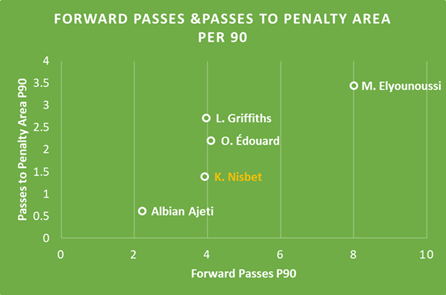 We can see Nisbet will need to provide much more creatively just like Ajeti. If he adds this to his game he could be a great all-round forward. 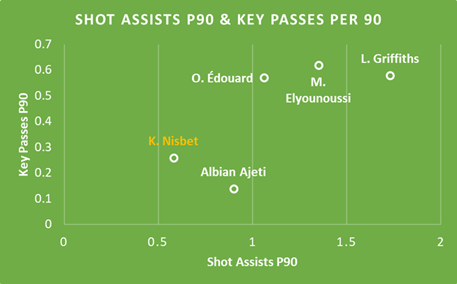 It’s clear Nisbet has had to deal with far more long passes, which might explain why it’s more difficult for him to link up play & his lower pass accuracies. In a less dominant side he , once again, was ahead of Ajeti. 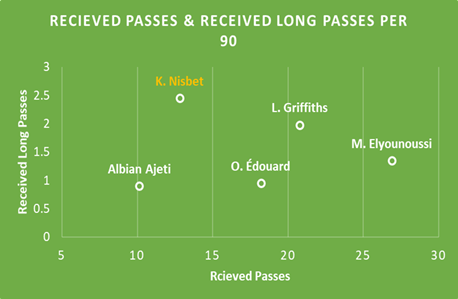 Nisbet is capable of playing for Celtic the only issue is, is he value for money at £4-5 million? Buying homegrown, he is used to the league and won’t have the long settling in period from abroad which is a huge benefit to hitting the ground running in.
He has already recorded a good output in the league so there is less risk in this investment. I think there is better value for money in Europe, but we need players that aren’t going to need games to settle and can perform right away.
I just don’t think he’s capable of replicating anywhere near Edouard’s output so personally, I’d rather spend more on a better forward if given the option. However, as I said if we want to sign 2 strikers, he should be one of them. IMO: Sign as 2nd choice