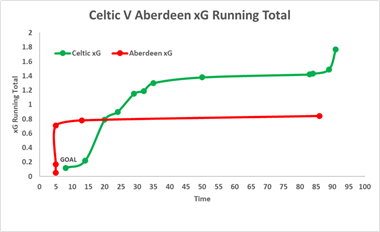 Comparing the two recent Aberdeen games. The xG tally indicates better game management and structure from Kennedy. Outside the early flurry Aberdeen were restricted offensively, only threatening with crossed balls, which wasn’t the case under Lennon. 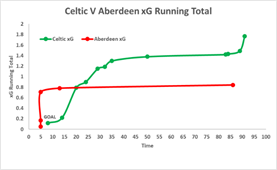 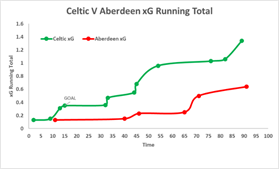 To reinforce this better game management idea from Kennedy, all we have to do is look at his subs. Lennon in the last Aberdeen game subbed Soro for Brown and brought Moi & Rogic on. So overall defensive cohesion wasn’t improved at a point where Aberdeen needed to attack.

However, Kennedy put Soro on with Brown tightening up the central area and changed to 4-2-3-1 to strengthen the wide areas defensively. This would limit crossed balls and Aberdeen’s ability to play through Celtic. Kennedy, here, proved to me he was miles ahead Lennon in tactical ability.

This was easily his most impressive performance as he showed he can have creative output if allowed forward. He was 3/3 from crosses and provided 0.63xA. Most of his passing metrics were above average as well as his defensive duel win rate.

Some examples below of Kenny’s smart deliveries. A first time cross to Klimala for the best chance of the match and a smart cut back to McGregor late on.

Aberdeen’s man-marking system continues to be a laughing stock. The CB steps out for an event that doesn’t occur. When recovering he panics and tries to match Klimala’s good run along with another CB. All 3 Aberdeen CBs now covering just Klimala, quite funny. 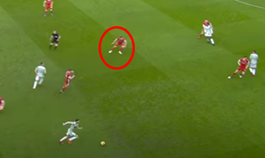 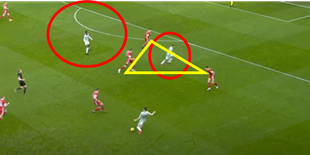 Christie plays a great ball to Edouard who gets the deflection and the goal. Again, a funny 6 player circle of Aberdeen players nowhere near Eddy. I kind of feel bad for Aberdeen fans having to continually watch these awful tactics. 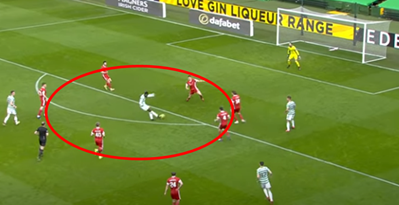 Ajer was given MOTM by the pundits and at the time I thought this was fine and he had played well. However, looking at his data he was well below-par on both defensive and aerial duels. His total action success rate was down 7% to 73%.

I thought this was interesting as it went against my perception which is always good to note. Perhaps, I have a bias in wanting to see him as always playing well. It just shows how important data can be to judging performances. Did the data change your opinion?

Scott Brown has at last been given some form of tactical instructions. Brown played deep between the 2 CBs but he would stay very central. With his relentless pressing forward and in wide areas stopped, there were far fewer gaps to exploit for Aberdeen.

Heat maps from his previous 3 starts before this game show how much more disciplined he was.

Each started one of the last two Aberdeen games. The main difference between the 2 performances was that Soro played further up as a natural 6. We can see Brown sits just in front of the CBs whereas Soro pushes forward to sit at the halfway. 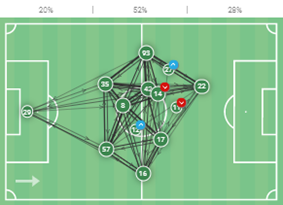 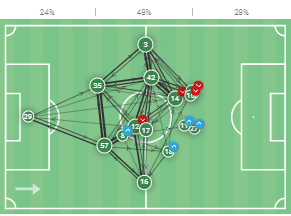 Brown is less effective in forward play, this can be seen when comparing passes to final 3rd from the 2 games Soro’s passes come from a higher position as he tries to find forwards in gaps whereas Browns looks more like a CB with passes to fullbacks being the priority. 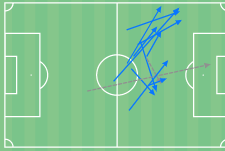 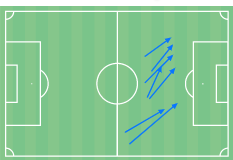 I think this was Laxalt’s best performance as he completed 40% of his crosses and got his highest xA so far for Celtic with 0.25. He has finally been given instructions to stay wide and get to the byline which has helped improve his game.

He hugged the touchline more and rarely came central as before. This is shown from his heatmap compared to his seasonal heatmap. There are still moments where he is out of position and he is still a danger when Celtic defend crosses, but its finally some positive output.

The only thing Kennedy couldn’t improve on was defending crosses. In the 5th minute, Aberdeen had 85% of their offensive output from one attacking play which had 3/5 attempts.

It starts with a corner, Laxalt has lost his man similar to the Ross County goal but isn’t punished, Ajer, however, gets under the ball and Aberdeen hit the bar from the resultant header.

The defence as usual disintegrates into a panic, as everyone follows the ball. Brown and Ajer have lost their men. Brown does well to recover and block the shot. Notice Considine and Taylor now unmarked. It’s important for later.

The defence still hasn’t recovered and Welsh is 2v1 at the back post. Taylor gets in-between him and Ajer on his blind side and should have scored. Great save from Bain. This has to be Kennedy’s focus in training, we are all over the place. 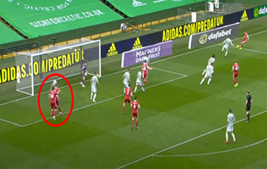 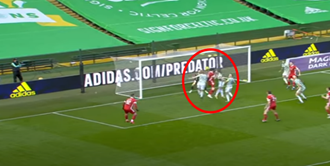 This game showed what I and many others were thinking, that tactical issues came from Neil Lennon. With Kennedy, there is signs of a plan and thought process behind how we play. He won’t get the job but a good account could set him up for other SPFL jobs.

The question is why did Celtic wait until it was too late to admit they were wrong and force their fans to suffer. Such a shame that the season has been wasted. At least the first steps to recovery have been taken

Thanks for reading and well done getting to the end